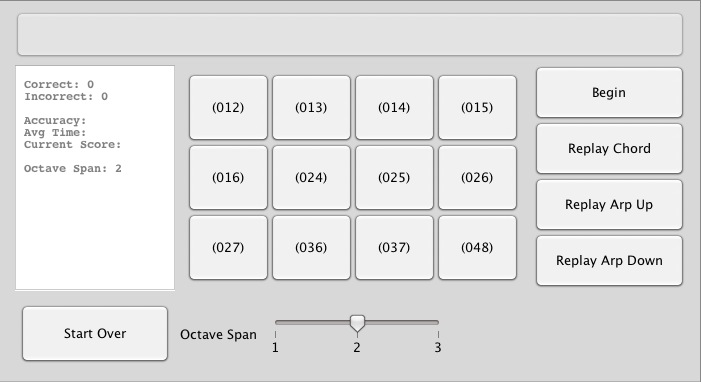 PTETSuite is a post-tonal ear training program that focuses on setclass and pitch-class interval recognition. The above picture shows one of the activities in the suite, namely the trichord recognition trainer.

Features in the Suite

Currently the suite is comprised of four set recognition activities, starting with unordered interval classes, followed by ordered pitch-class intervals, trichords, and tetrachords. There are hopes that since the foundation has been built more activites will be added in the future. 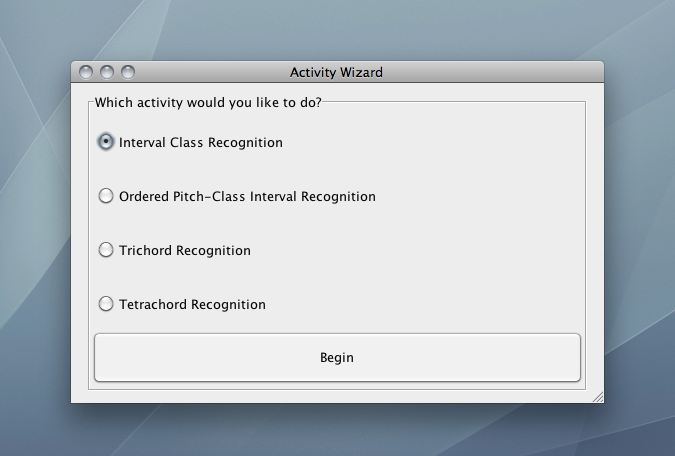 A nice feature that was recently added is the option to select the midi instrument, thus allowing the user to choose something besides the default midi piano. The collection of sounds available to you will be dependent on the midi instruments on your computer. This is a nice feature since change in timbre can have a dramatic effect on how well the listener is able to recognize sets. Changing up the sounds while playing can greatly broaden the flexibility of the user’s perception.

The game is quite simple. Once the Begin button is pressed, it need not be press again through the course of the training since the next chord is played once the correct answer is given. To pass, press the Begin button. This will give a new sound, but at the price of gaining an incorrect answer. Once the sound has played, the chord and arpeggiated chord can be heard again by pressing the corresponding replay buttons. The Start Over button clears the score and resets the timer, effectively restarting the session.

Understanding and Utilizing the Score

The score is based on a formula that is dependent on the overall accuracy and the average time. The average time is the total time from when the begin button was first hit or when the begin button was first hit after pressing the “Start Over” button, divided by the number of correct answers. The average time thus includes all sorts of other chunks of wasted time, like computer processing time and the slight pause before each play. However, do not fret; just take this into consideration and judge yourself against a reasonable average time. In general, you are doing very well if you are responding in less than 5 seconds.

The best method is to shoot towards a specific number of correct answers, say 20 or 50. Once you reach that goal, stop and check out your status, making a mental note of the score. Then, after a short break, press the ‘start over’ button and then the ‘begin’ button to start another round. In general it is better to work harder in smaller chunks than in longer chunks that become tiresome and unproductive.

Furthermore, it is better to take time and to try not to get any incorrect answers. For the skill building process it is much more fruitful to carefully listen than to simply throw out guesses that are not well thought out. The scoring system accounts for this, in that incorrect answers have more of an effect on the score than do a few extra seconds of calculation time.

PTETSuite is written entirely in Java, and employs some classes from Java 1.5. If you do not have Java installed, or have Java 1.4 or below, then PTETSuite will not work on your computer. For macs, this means that you should have OS 10.4 “Tiger” or later.

The above trichord recognition trainer is a Java applet, so if it isn’t working properly, or isn’t displayed at all, then this is most likely to be a problem with running Java in your browser. First, try simply refreshing this page. If that doesn’t work then try closing all browser windows, then relaunch your browser and visit this page again.